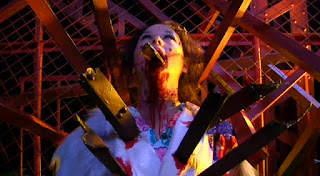 Co-directed by the guy who directed Tokyo Gore Police, this is another wild ride and this one will probably offend people in the US unexpectedly, as it shows girls following a fashion fad in Tokyo that's extremely racist to some. So you were warned. A high school girl gives a boy a box of chocolates. These chocolates contain drops of her blood she put there intentionally because she's a vampire and she wants him to be one and live with her forever. ["Twilight" has so damned much to apologize for.] She, however, has a rival, who she pushes off a roof, killing her. But wait! The girl's father turns her into a Frankenstein-like monster. It's very very gory and played for laughs, which mostly don't work (it might be a cultural thing, but I think they just aren't funny). It's yet another attempt to make a sure-fire cult movie.