How bad is it? Wow this sucks. I mean... wow.
Should you see it? It's VHS only and not worth the search. 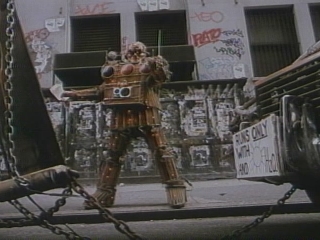 Just when I think I've seen all the worst films aimed at children, I discover this (actually, I saw part of it in 1988 and was so bored I turned it off, but I have now seen it all). A father who's an antique dealer creates a robot to find gold and to tend to his children. For some reason, he gives it a creepy voice not unlike Jon Frink of "The Simpsons." A villain steals a gold helmet and that's about to start a Muslim holy war. The family then, after 60 minutes of tiresome "antics," confronts the bad guy and recover the helmet. Joe Pantoliano and John Rhys-Davies are both in this! The film was redubbed, with the children's voices sometimes done by adults, rarely matching their mouths and ALWAYS AT EXTREME VOLUME. There's Drano in food, which gets ignored; there's guys in drag for no apparent reason; there's a rescue by toy robots that's inexplicable. The effects are terrible, even for a no-budget film, the dialogue when it's about anything still meanders, the plot's too contrived and requires too many coincidences. It's just awful.
Posted by SteveQ at 9:36 AM