How bad is it? It's reprehensible garbage, but competently made.

Should you see it? If women's prison films are your thing, by all means. But don't admit it. If you admit to seeing it, don't say you liked it. And if you like it, don't say it publicly (like in a blog).

This is one of those rare films where it's lack of production quality actually makes it more effective. The film is generally underlit, making it seem grittier and perhaps more authentic. Most of the serious gore is left off-camera (when it isn't, it's not well done) and this causes one to imagine far worse than if it were explicitly shown. Star Dyanne Thorne's makeup is heavy to the point of being a mask, making her on a par with any hockey-masked slasher in the 1980's. It's impossible to find photos that show the charisma of the main character; here's the best available that have no nudity: 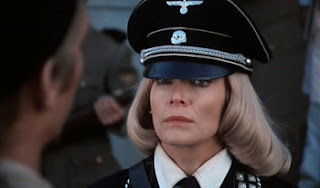 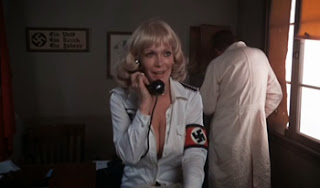 The plot consists of Ilsa trying to prove through medical experiments that women can endure more pain than men and therefore should be allowed to fight in combat; lack of logic notwithstanding, that makes this a women's rights movie... right? She also beds a different man every night and, when he fails to satisfy her, she has him castrated and killed - so one could argue it's her sexual frustration that causes her bad behavior, but that's reading too much into it. In the end, of course, she gets her come-uppance and is killed (a point overlooked in the sequels) and the victims turn out to be just as bloodthirsty as Ilsa, which is perhaps the most sickening thing in the film, though psychological horror is just a side-benefit of revenge gore.

Thorne was 42 when this film was made (perhaps in bust measurement, as well as age) and causes the viewer to think she must've been something to see when she was younger. [Not really the case - I've seen "Swinging Barmaids" and "The Erotic Adventures of Pinocchio" (It's not his nose that grows), made when she was younger. She was fetching in her brief moment in my favorite episode of the Star Trek TV show, "A Piece of the Action," however.] Breast fetishists get a double dose of what they seek because of the brief appearance of Uschi Digart, as the woman killed in the pressure chamber.

The most memorable scene for me is the woman strung up while standing on a block of ice; she freezes and the melting tightens the noose. It's done on top a table, as entertainment for men having dinner. Yeah - the film's that classy.

The two things the film has going for it (no, not breasts) are the sets, which turn out to be the same ones used for the TV show "Hogan's Heroes" and the unrelenting seriousness of tone, which is sadly lacking in the follow-ups "Ilsa: Harem-Keeper of the Oil Sheiks," "Ilsa: Tigress of Siberia" and "Ilsa: The Wicked Warden." "Harem-Keeper" has one good gross-out joke and even more nudity. "Tigress" has better cinematography, but is dull. "Wicked Warden" is a by-the-numbers women's prison film by Jess Franco, also released as "Ilsa - the Ultimate Power," "Wanda, the Wicked Warden" and "Greta the Torturer."
Posted by SteveQ at 12:36 PM No comments:

Just how bad is it? The last half is essentially a home movie.

Should you see it? Yes, but only after immersing yourself in bad movie culture, and then with a judicious use of fast-forward.


Ray Dennis Steckler, who made this film, has told many conflicting stories about it. Here's what I think is the truth. Having worked on a few Hollywood films, Steckler got involved with Arch Hall Sr. and ended up in Hall's movie "Eegah." I think Steckler wanted to emulate Hall and make his own films. "Rat Pfink" starts out with violent scenes that seem like Hall's "The Sadist" and has musical scenes like "Wild Guitar." After spending about $8000 on filming a script titled "The Depraved" in 1965, Steckler looked at what he had filmed and decided it wasn't going to work and abandoned it. While making another film, "The Lemon Grove Kids Meet the Monsters," he decided to jump on the sudden "Batman" TV show craze and turn what footage he had shot of "The Depraved" into a parody; the ape from "Lemon Grove" appears in "Rat Pfink" and Rat Pfink and Boo Boo appear for one second in the background in "Lemon Grove."

The film starts out with two thugs attacking a woman. They then start harassing another woman (Beaumont, played by Steckler's wife Carolyn Brandt), first with phone calls, then stalking and finally kidnapping her. This is actually not terrible, but it's oddly juxtaposed with musical numbers by Ron Haydock (billed as Vin Saxon), who had recorded a single in 1959; the song "You Is a Rat Pfink" is pretty good, the others passable. When CeeBee's boyfriend rock musician Lonnie Lord (Haydock) and Lord's friend Titus Twimbly (CeeBee's gardener! played by Titus Moede) hear of the kidnapping, they discuss what to do - while Lord sings a song.

This is when, 40 minutes into a 72 minute film, things get very weird. Lord and Twimbly go into a closet and emerge as crime-fighting alter egos Rat Pfink and Boo Boo. Rat Pfink's outfit is a pair of tights and a ski mask, Boo Boo's apparently an altered Halloween costume. Rat Pfink changes his voice to a sonorous drone and spouts heroic non-sequiturs and then they head off to the rescue.

The rest of the film is largely extemporaneous, filmed as Steckler got ideas. There is an interminable chase with Rat Pfink standing in a motorcycle sidecar, filmed in fast-motion, then a foot chase, then an unchoreographed fight scene. Another fight scene then pads the film. And then an escaped gorilla has to be fought as well! After the rescue, the heroes are given a parade (it's obviously a parade that they crashed for filming and the crowd reaction is fun to see - though not as good as the one in "The Mummy and the Curse of the Jackal"). Finally, there's a celebratory beach party with one more musical number.

The movie was shot in black and white, with scenes tinted in color and was shot silent with sound added (the synching is not expert). It played briefly at drive-ins in the southwest and then became impossible to see. Michael and Harry Medved touted "Rat Pfink a Boo Boo" as the worst title in film history in their book "Golden Turkey Awards" and reviewed it unseen. Michael Weldon gave a plot synopsis in "The Psychotronic Film Encyclopedia," but he had not seen it either. After this, it was given a video release (ca. 1985) and eventually made it onto DVD.

If you're going to see one Steckler film, see "The Incredibly Strange Creatures..." If that intrigues you, then this might interest you.
Posted by SteveQ at 9:59 AM No comments: