How bad is it? If it weren't dull, it's be a classic of bad films.
Should you see it? Mmm. Yes, but don't expect much. 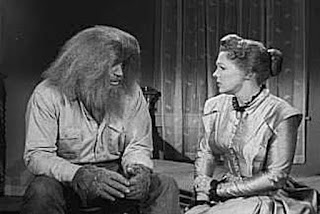 This was filmed to be the bottom of the twin bill with my beloved "Brain from Planet Arous." In the 1880's old west, a meteor kills a man and rays from it turn his young son into a monster. The mother then hides the monster - now ludicrously miscast as a 50 year-old man in hair and ugly make-up - in a cave, but he escapes. There's actually a whole lot of plot and side-plots, some of them unseemly (particularly for the 1950's), but you won't care. The monster is involved in a lot of long dialogues, even though he's become a moron and is unintelligible. There's some truly laughable bad lines and some bad line readings as well. The lead actor/monster reacts to everything in the same weird awkward way. Well, childhood has its awkward phases, with or without cattle killing.
Posted by SteveQ at 9:14 AM