How bad is it? It's not Rene Cadona Jr.'s best - so pretty bad, indeed.
Should you see it? Only if you really love gore and hate birds. 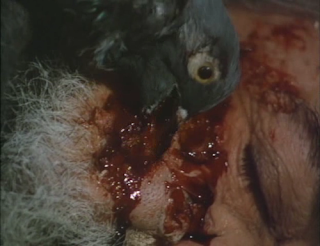 "Birds of Prey" didn't work as a title, because the film features mostly chickens and pigeons, so "Beaks," being reminiscent of "Jaws," was used in a re-release. Either way, it's just a rip-off of Hitchcock's "The Birds," with exactly the same plot, including the child's party, but with some added nudity and a lot of gore. It's not the campy spoof the cover box art suggests. There's eye-gouging and skin-ripping and the quality's not bad if that's your thing. There's also footage from three continents, slow-motion shots of birds doing nothing in particular - while people repeatedly say "They seem to be organized," bad dubbing, hang gliders and a lot of ridiculous dialog. My favorite lines: "We're sitting ducks," "Turkeys are killing people and it's not even Thanksgiving," and "Your blood pressure is 80 over 140; perfect."
Posted by SteveQ at 9:34 AM