How bad is it? It's bottom of the trash barrel stuff.
Should you see it? No, unless you're doing a dissertation on how not to make a movie. 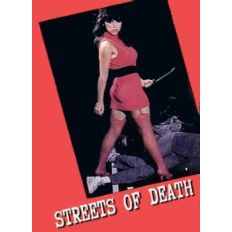 This was directed by Jeff Hathcock, who also lensed "Victims!" "Night Ripper!" and "Fertilize the Blaspheming Bombshell!" and this film differs in that the title doesn't have an exclamation point. I haven't reviewed those other films, because they're bad enough that they're not entertaining. This has two gay men abducting prostitutes and then using them to make snuff films, so a cop goes undercover as a hooker to catch them. It's more violent than you expect and a lot less sexy than these things tend to be (though there is one striptease that's passable). The dialogue is wretched and delivered woodenly. Mostly, the film is misogynistic and homophobic.
Posted by SteveQ at 9:20 AM