How bad is it? Interminable soft-core "Jaws" rip-off.
Should you see it? If you're watching shark movies, it's one of the better "bad" ones. 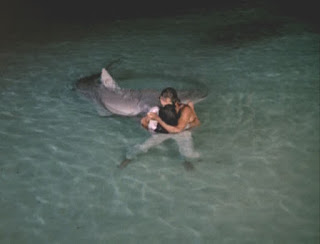 There's a number of versions of this one, the longest I've seen about 126 minutes (I believe there are longer ones) and all have maybe 3 minutes of shark attack scenes. Three shark hunters go on a sporting holiday - and there are a TON of critters getting harvested - and there's several love triangles turned into threesomes. Susan George and Hugo Stiglitz are the big name in the cast, Rene Cardona, Jr. directed. There's a lot of nudity, some nice bodies among them, but surprisingly little sex. The film is not really about sharks, but people, and it's unfair to compare it to "Jaws," which it obviously was trying to cash in on. It's very slow and stupid, but it's pretty and rather watchable.