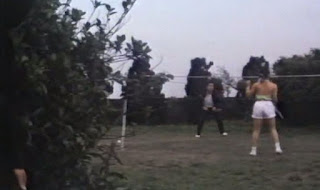 Thought I was done with Godfrey Ho ninja films from 1988? Nope. This one splices together two films that had ninjas in them with new ninja footage, yet this has less ninja action than most Ho films. The climactic battle ends with a guy turning into feathers - I think. Still, you get to watch a woman wash her leg and see people play badminton to a disco version of the E.T. theme. There's also rapists having a barbecue on the beach. The story has a guy find his wife in bed with another man and he may or not kill him by throwing a drink in his face, but he gets called a murderer throughout the rest of the film. Then he goes on the lam. There's another story tangentially tied in of trying to find the manual that will make one the ultimate ninja (no one ever reads the manual in real life). Mostly, the film is dull talky scenes.