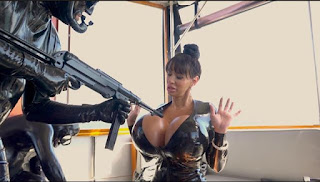 This 30 minute film was advertised as being in the line of Russ Meyer or Andy Sidaris films, but it owes more to fetish comics. Three agents with enormous breast implants (we're talking gallons here) battle a bunch of latex-sporting SCUBA men for a death ray. The female stars can't act, and one has an accent that's distracting. I really wanted to like this, but was disappointed. Amazingly, there's no nudity.


The largest commercially available breast implants are 3000 cc, which when overfilled to a sphere can be pushed to 4000 cc [I know of two cases that are larger, using discontinued products]. If they were silicone, at 4 liters, they'd weigh 6.5 pounds each, but as saline are slightly over 8 lbs. This weight often causes the surgical scars to open, making removal necessary. Implants last 5-10 years before leaking, requiring replacement or removal and reconstructive surgery. Anyone who does this to themselves has some form of body dysmorphia and should spend their money on therapy instead of surgery.