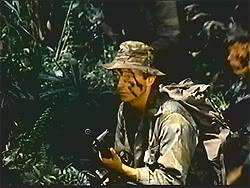 Finding this is tough; there are some VHS copies floating around and a DVD that's never been released in the US... and that's a shame, because this is worth seeing. [As I type this, I just know someone will tell me it's now readily available] Christopher Mitchum stars in this ultimate 1980's action film. There's a long 10 minute intro, where Mitchum's son is killed and his wife gang-raped and then killed. Once you get past that, it's 70 minutes of explosions, car crashes and gunfire. Every cliché gets hit: there's a flashback to Vietnam, complete with exploding huts and guard towers; the hero gets tortured; there's a car chase that ends with a vehicle flipping after a truck full of tomatoes gets spilled, there's a MacGuffin of a disc with evidence, there's a helicopter explosion. Three days after his wife's murder, Mitchum teams up with a woman who wants revenge for her sister's death and they fall in love, which makes this revenge for the loss of the love of his life questionable.  Mitchum rides a motorcycle with both a machine gun and a rocket launcher, uses the latter to blow up a car, and then jumps over the flaming wreckage! One stunt gets repeated, using shots from a different angle and they pretend it's a separate incident. There's an impaling on a tree branch, a hot poker shoved up an ass, a bomb set off in a guy's crotch. There's stunts where the stuntmen did not walk away. This deserves to be better known.