Mari-Cookie and the Killer Tarantula (1998) 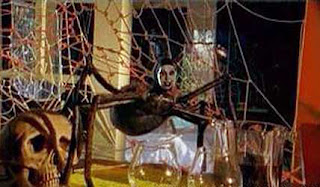 This was mentioned by Sean Frost as the Jess Franco film that broke him and he's seen a big spider movie or 200. I hate Jess Franco films, including the ones most people like, but this one not only has Lina Romay, but Michelle Bauer and Linnea Quigley (the latter only briefly), so I gave it a shot. I did not expect the papier-mache spider with the xeroxed face that graces the cover to actually be in the film, but there it is. The plot involves people going missing, so they investigate a strip club, because it's a Franco film. In one of the odder moments, a flashback reveals that after Romay was being raped by a soldier, a tarantula crawled into her vagina and laid eggs. Why that makes her a part-time giant killer spider is not really explained. There's a lot of nudity, none of it appealing (Quigley is naked only in the commentary!) and there's not much else to recommend it, including a throwaway joke about Franco (who died 23 years earlier). 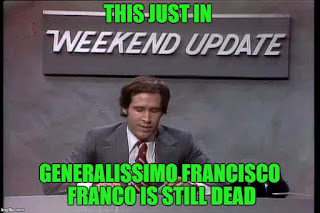