How bad is it? It's astoundingly bad.
Should you see it? I'm shocked to say it, but... yes. 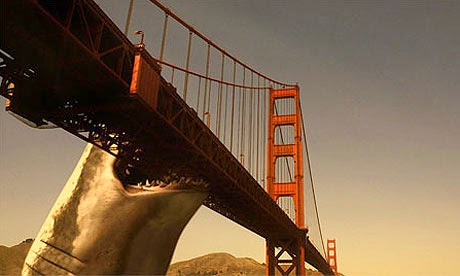 The film production crew known as The Asylum is best known for "Sharknado," but have been making films since the 1990's. Before they discovered that they could make anything with the word "Shark" in the title and the SyFy network would buy it, they actually tried to make entertaining films. This is the only one I like.

Two prehistoric monsters get released from suspended animation in a glacier and wreak havoc in entertaining fashion, such as the shark leaping thousands of feet into the air to take down a jet plane and snapping the Golden Gate Bridge in half. Attempts to destroy them seem only to make them angrier and, as nuclear weapons are contemplated, the idea of pitting them against each other (attracted by pheromones, because everyone just happens to have the makings for giant extinct monster pheromones).

Unlike most films by this group, two recognizable names are in the cast: Deborah "Don't Call Me Debbie" Gibson and Lorenzo Lamas. The special effects are truly laugh-inducing, though they also often caused me eyestrain - it looks as if they filmed for 3-D and have that weird overlap fuzziness such films have if you watch them without glasses. There have been two sequels (so far), "MegaShark vs. Crocosaurus" and "MegaShark vs. Mecha Shark," the latter which manages to rip-off "Godzilla vs. MechaGodzilla;" neither of these are as entertaining.
Posted by SteveQ at 8:43 AM