How bad is it? Unneeded sequel that squanders the original's value.
Should you see it? No. That also goes for the other sequels of Lake Placid. 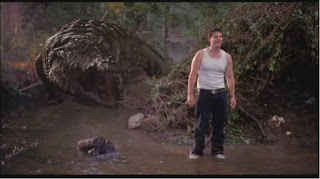 I enjoyed "Lake Placid." This sequel returns John Schneider and substitutes Chloris Leachman for Betty White, but while the original had Bridget Fonda, Bill Pullman, Oliver Platt and Mariska Hargitay, this one substitutes brief nudity for them. The CGI is poor, even for a film that premiered on the SciFi network and the plot is nothing other than people vs. crocodiles (which are weird for Maine, but I'll let that pass). This is actually worse than the (so far) 3 MORE sequels that followed: Lake Placid 3 (2010), Lake Placid: The Final Chapter (2012) and Lake Placid vs Anaconda (2015).