How bad is it? Turgid retread of Universal horror themes with a silly monster.
Should you see it? Don't go out of your way, but if it shows up, it's worth a watch. 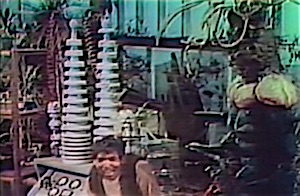 This film is usually seen by people who start out with bad directions. There was a story that it was written by Ed Wood, Jr (it wasn't) and the credits are for "Mad Doctor of Blood Island," with which it was billed, so people mistakenly report that John Ashley and Angelique Pettyjohn are in it (I really had hoped that it would include the deleted sex scene from that other film). In this, a man does experiments with plants, including an aquatic kind of venus flytrap procured for him by topless female divers in Japan. He creates a human/plant hybrid, which he has to feed ever larger animals, eventually including people. The creature turns into a sort of man with venus flytrap hands and uproots itself, going after more human prey. The scientist then debates whether he should warn people or protect his work. It's very dull, but there are a number of nods to classic horror, from the hunchback assistant to using lightning to animate the creature and it's not unwatchable.
Posted by SteveQ at 9:26 AM