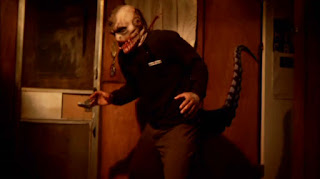 I suppose it was inevitable that someone would make a "Zaat" or "Hideous Sun Demon" remake and this is close to it. A man is left by his wife for his inability to produce a child, but he's a geneticist, so he joins his DNA to a lizard's to create an offspring. He then watches MMA fighting on TV with his "son" while they get high on weed, before the inevitable rampage. The film doesn't know whether or not it's supposed to be a parody - there's some intentional jokes, the mask and tail make-up are silly, the fight choreography is minimalist and the acting, cinematography, editing and directing are... acceptable for this level of film making.