How bad is it? It may be the worst children's film ever made.
Should you see it? Good Lord, NO! 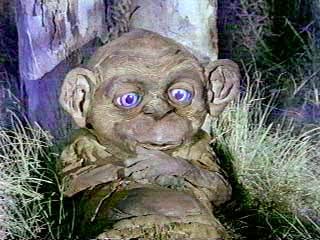 Sometimes, when people who enjoy bad movies get together, they give each other lists of films they should see and they sneak in at least one absolutely horrendous abomination. That's how I saw this.

Two alien brothers, Nukie and Meeko, who are supposed to be cute, but aren't, land on Earth, get separated and search for each other. Nukie runs from stock footage giraffes in Africa, then goes over waterfalls (yes, plural) in America, while Meeko gets bitten by a snake. And there's a monkey involved - I really don't recall why - but, at the end, all three take off to space together, but not before the monkey sucks snot off Nukie's face! Or maybe it was Meeko's face. Really, who gives a @#$%?

This really is one of the worst films ever made, with no redeeming values.
Posted by SteveQ at 11:43 AM