How bad is it? Scattershot comedy occasionally hits the mark.
Should you see it? If you're a fan of the cast. 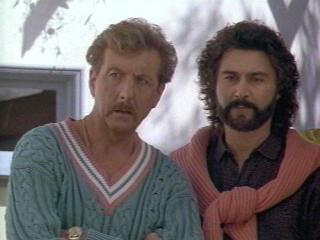 Wealthy man dies, leaving his fortune to his two children, if one produces an heir in a conventional manner - both are gay. Directed by Robert Downey Sr., this stars Eric Idle and Andrea Martin, with Allan Arbus, Robert Downey Jr., Howard Duff, James Hong and Ralph Macchio. The film starts out satirizing the extreme hubris of the wealthy in L.A. (while also depicting some of the scummiest areas), then becomes an attempt to squeeze out every possible offensive joke it can, mostly through stereotypes. Your level of tolerance for gay jokes will determine how you feel about this. There are some very funny moments, some clever ideas, but not nearly enough for its two hour running time.
Posted by SteveQ at 9:20 AM