How bad is it? Tame exploitation that goes nowhere.
Should you see it? Not really. 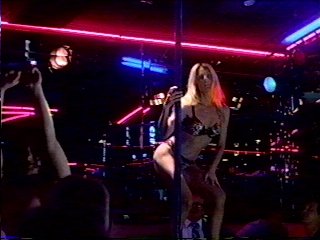 This is an exploitation film that fails because of the quality of its cast. Catherine Oxenberg takes the rap for her child when her abusive husband gets shot by their son and gets sent to prison. There they have a work release program that sends the girls out to be strippers! That's a brilliant conceit. Jeff Fahey, Bo Hopkins, Louise Fletcher and Larry Manetti have roles and it's both a stripper film and a women in prison film, but tries to be earnest and tasteful, so it ends up being almost nothing until an abrupt ending. There's not enough brutality for a WIP film or enough tawdriness for a stripper flick.
Posted by SteveQ at 11:10 AM