aka Thunder in Paradise 2

How bad is it? Silly spliced-together TV action.
Should you see it? Against my better judgment... I say yes. 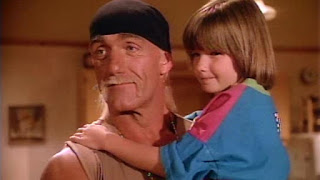 This comes in a box set (!) of three Thunder in Paradise films; the first one was a pilot episode for a TV series, the other two were cobbled together by splicing episodes of the TV show. It's best not to watch them together, though, as characters just appear and disappear and get re-cast (the annoying little girl in this one looks nothing like her counterpart in the first film). Chris Lemmon and Carol Alt have roles and Patrick Macnee does not... but he does get billing! There's an Arabian prince kidnapping a woman after promising to marry her, a bad guy in a ridiculous fake beard, an overlong dream sequence of a harem and then the required chase scene involving a boat that has rocket launchers and stealth technology - which, given a tiny budget, is where most of the laughs come. Oh, and though I hadn't mentioned it, it's a Hulk Hogan star vehicle (the credits nicely point out his real first name is Terry) - so it's got that going for it, which is nice.
Posted by SteveQ at 9:16 AM