How bad is it? Made by teenagers, and looks it.
Should you see it? Sure. It has it's low-rent charms. 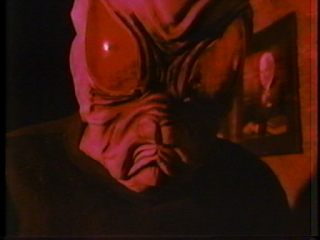 Available in two versions on VHS, this story follows a group of teens decorating an old mill for a Halloween party. Why they're wearing costumes days ahead of the party isn't explained, except the story doesn't work without it. You see, the one dressed as an alien... is actually an alien and hunts the rest of the cast. The kids are all squeaky clean (even for Utah) and none can act, but the film is one of the first of those "anyone can make a film" things that got released in the '80's. The monster is cheap, of course, and not frightening.
Posted by SteveQ at 9:32 AM