How bad is it? Unfunny comedy.
Should you see it? If you know who DJ Pooh and E-40 are. 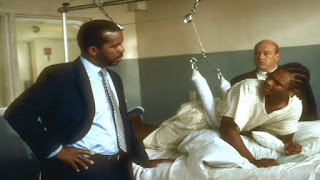 Every positive review of this is by a young black male, so I'm not the audience for this. A guy's released from jail just as a "Three Strikes" law is passed and the guy who picks him up ends up shooting at police, making this his third strike. The rest of the film is his trying to stay ahead of the law, a bit like "The Fugitive," but substituting fart jokes for tension. There's some familiar faces: David Alan Grier, Mo'Nique, George Wallace, Antonio Fargas and Mike Epps.
Posted by SteveQ at 8:58 AM