How bad is it? Amateurish, but not completely incompetent.
Should you see it? It's hard to find, not really worth seeking, but if you find it... 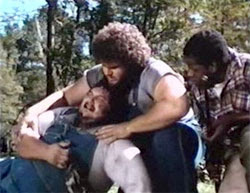 First, how could you NOT watch something called "Nutriaman: The Copasaw Creature?" Filmed in the Louisiana bayous with a local cast, including one guy whose accent was so thick he was redubbed, this is the story of trying to breed a supersized nutria (um, why not just get a capybara, that's sort of what they are) and getting a killer bigfoot-like monster instead. We never really get a good look at the monster, which is probably good, but we get some real hicksploitation: one guy says he had to watch the monster kill his dad because he was too drunk to act. There's a helicopter that dumps pesticide on people hunting the beast, just to make them move along and, in the end, it's a voodoo priestess that ends the show by luring people into quicksand. Sounds like a great film, doesn't it? Unfortunately, the first half is very good, but it unravels, cheapens and sputters in the second half.