How bad is it? Fails as both horror and comedy.
Should you see it? No. 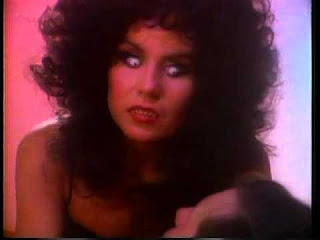 This film tries to be a throwback to the 1950's monster flicks, but uses cars from the 1950's and hair and clothes from the 1980's (and several anachronisms, such as flags with too many stars, advertising logos, etc.) and a plot from Bad Movie 101. A nerd takes up with a prostitute, who turns out to be a vampire and she turns him into a vampire, which suddenly makes him (inexplicably) cool and strong enough to beat up the bullies that tormented him. His mother doesn't like the change and gets an exorcism planned (though that isn't traditionally the way t stop vampires). Everything's cheap, which one expects, but it's also deadly dull.
Posted by SteveQ at 9:31 AM