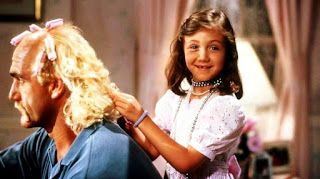 It's "Kindergarten Cop" done badly. Hulk Hogan stars as a bodyguard to two children so terrible that they scare away their nannies and he has to be their babysitter/nanny as well. There's a villain with a shiny metal plate in his head named Thanatos. It's never explained why the bad guy wants the computer chip that Hogan's boss has, nor why he coincidentally has a vendetta against Hogan (to be fair, there might be a reason for the latter having to do with getting that metal plate). There's "Home Alone"-like slapstick where the nanny gets electrocuted, knocked down steps, crushed and hit in the head with a bowling ball. There's a ton of terrible dialogue meant to be funny - you could do a workshop on "hack comedy writing" based on this. Sherman Hemsley shows up, which is probably the best thing going for it.