aka Order of One: Kung Fu Killing Spree 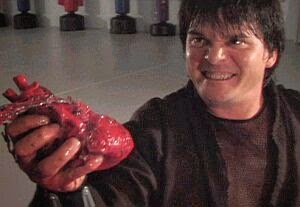 This film is about a sword made from the spear that pierced Jesus on the cross, which gives limitless power and the fight for its possession. Despite a low budget, this is stylishly made, with good camera work and editing. It's very tongue-in-cheek, with action scenes having 1960's "Batman"-like graphics added; my favorite is "EYEBALL EXIT PUNCH!" One guy gets killed by a bullet hitting a grenade he's holding. There's a fight in a strip club. A guy gets dragged behind a car for quite a while. There's too many characters to keep track of and it sags a bit in the middle, but it's enjoyable. Recommended.