How bad is it? Dreadful and lame.
Should you see it? Only if you liked Munchie and aren't disappointed by sophomore slumps. 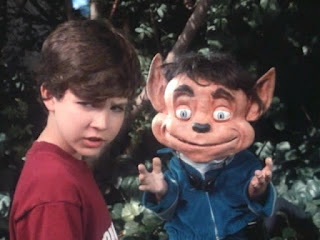 The alien Munchie is indeed back in this sequel, but is now voiced by Howard Hesseman, rather than Dom DeLuise. Loni Anderson returns, as do Angus Scrimm, Andrew Stevens and the annoying lead kid actor and the cast now includes Lesley-Anne Down and John Byner. The jokes still aren't aimed at kids, but there are fewer cleavage shots and more jokes about Reaganomics, Donald Trump and the Hillside Strangler. There's a scene in heaven with Elvis, Marilyn Monroe and Col. Sanders. There's footage borrowed from "Death Race 2000" with this film's characters just layered on. The plot still has an alien trying to redeem himself by helping a child whose father died and whose mom loses her job just as she has a mortgage balloon payment (what kid film has balloon payments?!) The end credits suggest a further sequel, Munchie Hangs Ten, which was never made.
Posted by SteveQ at 8:54 AM