aka Fertilize the Blaspheming Bombshell, aka Triangle of Death

How bad is it? Really, really bad.
Should you see it? No. 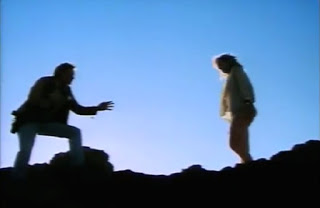 Troma released this in a 3-pack, giving it a great new title. That doesn't change the fact that the film is awful. Technically, it's all under-lit and the dialogue is often out of sync and drowned by music that doesn't fit the scene (possibly added by Troma to make it even worse). The plot has a woman search for her sister who's been abducted by devil worshippers and ends up in car (and dune buggy) chases and fights, while wearing only panties and a flimsy blouse. Bo Hopkins is in this mess, surprisingly.
Posted by SteveQ at 9:36 AM