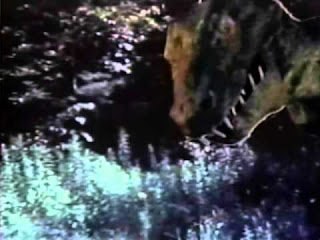 Written by, directed by, produced by and starring Mark Polonia, this film seems to be the only one he made without his brother and it seems his brother is the more talented one. Polonia films are bad, but this one's considered by far the worst technically. An explosion unearths dinosaurs and the usual chaos ensues. It was shot on Super 8 with poorly (and sometimes amusingly) dubbed sound. The dinosaurs are stop motion or green screened puppets or 1980's home computer graphics, but always worse than you'd expect anyone would think they could get away with. It's often overexposed and seems to be entirely in slow-motion. It sucks, but in such a retro way that I found it passable.