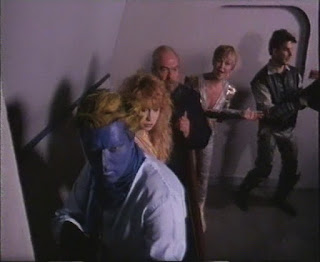 This is a deservedly obscure Star Wars rip-off that I found subtitled in Turkish, but which seems to have never been (legally) released on video. The hero's name is Chase, he has a partner whose face changes colors, and they rescue a scientist and his daughter from the evil Dr. Chrome, who plans on getting an infinite power source for his drones so he can take over the universe. There's a fight scene done in Clay-mation! There's a Playboy model who never acted in anything else (she and several others look at the camera and/or read cue cards). Climactic scenes are too under-lit to see. The sets look like they were left over from some other film. The same explosion is seen three times. It steals dialogue, wardrobe and plot lines from "Star Wars."
Posted by SteveQ at 9:16 AM