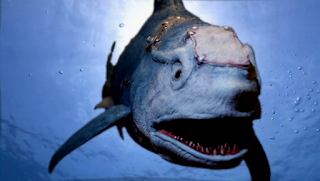 Directed by Mark Polonia, so you need read no further. Sort of taking an idea from "They Saved Hitler's Brain," this has Nazis weaponizing sharks and then 60 years later an evil brain being put into one that then goes on a rampage. A woman gets raped by the shark... for laughs. Much of the cast is supposed to be teenagers, but are obviously a decade older and one annoyingly wears a sideways baseball cap so you KNOW he's a teenager. The shark itself was made by Brett Piper, who has some ability, but Polonia did the special effects, which are very very poor. The cast is mostly recycled from "Bigfoot vs Zombies," another film to avoid.

And, with this, I managed to stretch the shark film reviews to Discovery Channel's Shark Week.