How bad is it? It just might be the worst werewolf movie. (Werewolf of Woodstock is hard to beat)
Should you see it? Yes, but it's gonna hurt. 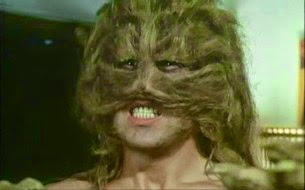 Written, directed, starring, edited by and with special effects by some guy named Andolfi, this vanity piece has the worst werewolf transformations since, well, perhaps ever. For one thing, hair appears to end wherever he got tired of making the costume. For another, his clothes disappear and reappear during the transformations. The plot, such as it is, has a guy protected from lycanthropy by wearing a cross that contains seven jewels. Two different group of bad guys are after it. The rest of the movie is the star having sex - sometimes as a drooling monster - and beating up bad guys, with mediocre gore effects.