How bad is it? Not bad at all, unless sacrilege bothers you.
Should you see it? Yes. 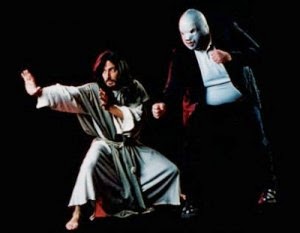 One-upping Abraham Lincoln, Vampire Hunter, I guess, this film has the Son of God in the present day, teeming up with Mexican wrestler Santo (sadly, not the original Santo) to fight vampires who attack lesbians in Canada. There is, wait for it... a musical number. The film has energy to spare and enough laughs to keep the movie going, though the premise is pretty thin. Messages from bowls of ice cream, sand castle representations of the universe and a clown car full of kickboxing agnostics are just some of the things that make an appearance. I think this film's too good to be considered "so bad it's good," but it has a large number of detractors who found it tiresome after a while.