How bad is it? technically okay, but logically incoherent.
Should you see it? If you're having a brain transplant film festival, maybe. 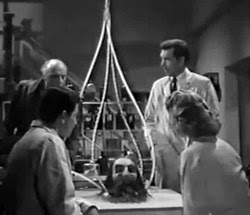 There were a lot of disembodied brain films in the 1950's, but this one has a problem the others doesn't - the brain transplant is not the least likely thing in the film. The head of Nostradamus has been preserved for 400 years - inexplicably - and is still making accurate predictions - and a man with a brain tumor decides to have a brain transplant, so he can have that power, too. The fact that he won't actually exist, since his own brain is gone, seems to go over everyone's head (hmm, sorry). The scene where they try to convince Nostradamus that he's actually a 20th century industrialist is just too weird; that the actors get through it straight-faced is remarkable.