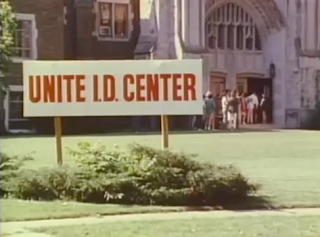 Okay, I think I've finally hit the end of the fundamentalist Christian films I'm going to cover and it happens to be the grandaddy of them all, the sequels of which I've already covered. A wayward young woman starts noticing signs that the Biblical end times are coming, but doesn't change her ways. The Rapture happens; driverless cars crash, a lawnmower runs with no one to push it. A minister who wasn't brimstone and hellfire enough finds that he, too, is left behind (hey, "Left Behind" would make a great title... in 2002). People get the government ID Mark on the forehead and hand, as prophesied (apparently). There's about 2 dozen sermons, a dozen songs - and this was before Christian music had it's own genre to ignore - and not a lot of action in 80 minutes. There's a sketchy youth pastor and an EMT seemingly doing a Humphrey Bogart impersonation, but no one to either hate or cheer for. Instead of being scary, the early stages of Armageddon are dull. Also, only white people are seen in heaven.