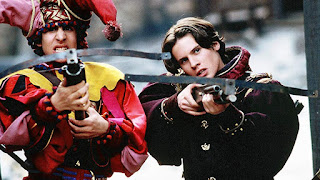 By now, I've learned that "Canadian production shot in Romania" means "looks good, but cheap-ass snorefest." There's a bottle cap contest where the winner gets to go to a medieval village run by androids (stolen from "Westworld") and the kids are mostly brats who need to learn a lesson (stolen from "Willie Wonka") and there's a freak storm that changes things (stolen from "Jurassic Park") and they get transported back to the 14th century (stolen from "A Connecticut Yankee in King Arthur's Court") and then nothing happens for a long time. They have to defeat the bad guy, of course, and find their way home and they do so. Romanians faking British accents is amusing for a few minutes and the rock-bottom CGI is amusing for a few seconds.