Thunder Ninja Kids III: The Hunt for the Devil Boxer (1991) 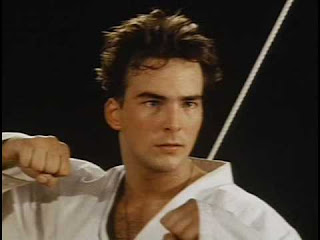 This is a Godfrey Ho mashup of a Chinese hopping vampire film with some added ninja footage. There's no thunder, the kids aren't ninjas, there's no hunt, the devil is not a boxer and it's not the third film of a series, but otherwise the title holds true. Caucasian actors turn Asian. There's a terrible UFO. There's a baby bottle full of blood. There's a blonde guy with a fake black mustache. There's guys in red ninja garb. There's a kidnapping and rescue - I think (that would suggest a plot). As far as mindless action goes, it's okay and, as far as Godfrey Ho films go, it's not bad at all.