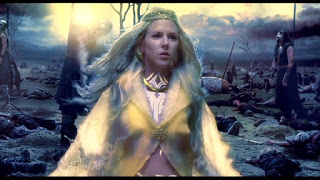 If you're going to try to emulate the film "300," you should have a decent-sized budget, or else you get something like this film about forgotten King Eirik and his battle to stop the Norse god Thor. First of all, it was filmed in Malaysia and looks it, though most of the cast is at least European (there is an Asian martial artist in the cast). There's some bad wigs as well as bad CGI, some poor line deliveries - though they seem to be having fun - and lines that themselves are unintentionally funny. It's kind of fun as dopey nonsense action. Don't go out of your way to see it, but if it lands on your screen, you can have fun with it.