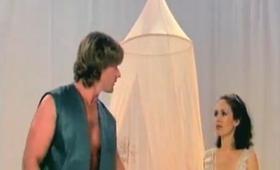 Retitled and released by Troma, this is an incoherent mess whose plot involves guys stuck on a prison planet trying to escape and needing "fire gems" to use a laser weapon (I think), which leads to a lot of bickering. There's some stuff in the prison, mostly involving a warden having sex with an inmate. This isn't a sequel to anything, but there's a narrated intro to make you think it is. I'm not sure there's an actual movie in this.