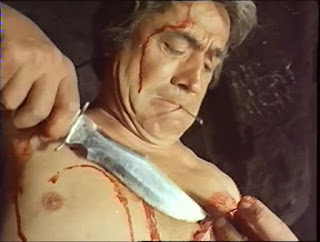 Featuring the star of a lot of Turkish remakes of action films, this follows the plot of "First Blood" pretty closely... eventually. There's a motorcycle gang and zombie rapists at the start, but that weirdness gives way to a more standard plot. There's a lot of violence and gore and some pretty good action scenes; intermixed with this are odd angles and cuts, conversations that seem cut off in the middle (sometimes maybe in the middle of a sentence) and occasional weird things that might make more sense to a Turkish audience. It's either better than "Korkusuz" (Turkish Rambo) or I'm getting used to these films.
Posted by SteveQ at 9:25 AM