How bad is it? It was made on a bet.
Should you see it? Yes. 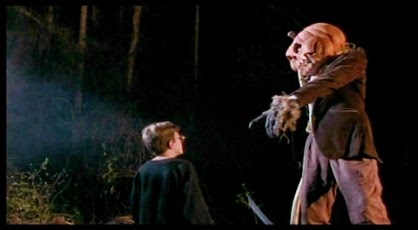 There was a few minutes of footage of John Carradine in woods that never got put into a movie and also a bit with Cameron Mitchell, who also died before this film was made, so a screenwriter was challenged to come up with a film that could use that footage a la Bela Lugosi in Plan 9. They added Linnea Quigley and Brinke Stevens to the cast and came up with this. A cross is removed from agrave, releasing a creature with a jack o'lantern head (this years after Pumpkinhead 1&2), which seeks revenge on the descendants of those who killed it centuries earlier. There's a small good bit about the earlier time, using a historic village, but the rest of the film is god-awful. There's a lot of people, but none can act and most are just victim fodder. The special effects are terrible (the lightning and electrocution are especially bad) and the line deliveries are emotionless. It does manage to be entertaining in spite of itself.
Posted by SteveQ at 9:01 AM