How bad is it? It's amazingly bad.
Should you see it? Most definitely. 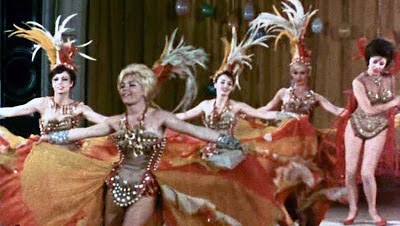 The first time I saw this, I absolutely loved it. The second time I saw it with people who were not into bad films, and every little flaw stood out and wasn't fun. The third time, I loved it again.

This is Ray Dennis Steckler's best film, and twice the budget of all his other films combined (reportedly $35000); it's the reason I've seen all his dreck. First, the film is amazingly well-shot; cinematographer Vilmos Zsigmond had just come to the U.S. from Czechoslovakia and couldn't get work in good films yet; Laszlo Kovacs, the other great Czech cinematographer, may also have been involved. When the dumb horror action stops for a Busby Berkeley-type dance production number, my jaw dropped.

Carolyn Brandt (Steckler's wife and also the make-up artist responsible for the terrible look of characters) plays a gypsy fortune teller, who when her readings get scoffed at, throws acid in people's faces and locks them in a cellar, where they become... well, not zombies, but monsters or just guys in halloween masks. Steckler, as well as directing, acts under the name Cash Flagg as a guy who you know is a zombie when he puts the hood up on his sweatshirt (Really! That's the difference!) The monsters get loose and go on a rampage at the end.