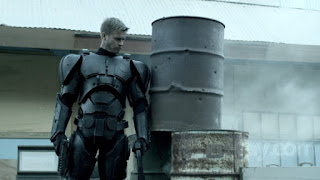 Having covered "Wolf Cop," "Zombie Cop," "Psycho Cop," "Hollywood Cop," Samurai Cop," "Space Cop," "Demon Cop" and "Karate Cop," how could I not do this one? It's still another Asylum film, meant to be a remake of "RoboCop," but also taking elements from "Blade Runner," "Almost Human," "Alien Nation," some Blaxploitation classics and a thousand buddy cop films. A detective gets partnered with an android cop and they go into the forbidden section of LA where there's a plague, to get the daughter of the mayor, whose consciousness is stored in a runaway android. This leads to a Mad max type car chase and a helicopter chase, some shootouts and some fights. There's a few good lines, like "If I shot everyone who attacked me with an axe, I would never have the time to get all the paperwork done." Michael Jai White stars and Charles S. Dutton has a role. It's a very passable time-waster.