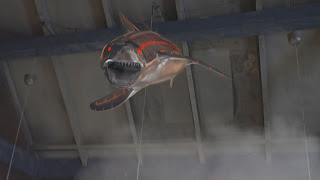 This is at least the 15th horror film directed by Jeffrey Lando, but I think it's the first I've reviewed. It's a very cheap Sharknado wannabe, but it has its moments. A space probe lands in the ocean, where a shark devours it and becomes Roboshark. It then decides to attack Seattle, specifically a Starbucks and a high school swimming pool. There's a lot of local humor that will be lost on those not from the area. A girl finds out Roboshark is following her on Twitter. The sharks messages are mostly emojis, that when deciphered mean "Roboshark Phone Home." They dispatch it by toppling the Space Needle on it. It's a minor shark film, but better than most.