Attack of the Lederhosen Zombies (2016) 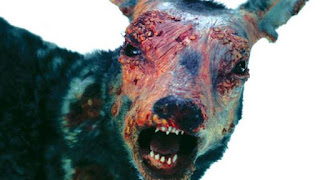 A zom com, like "Shaun of the Dead," this has a chemical meant to make snow instead turning people (and a deer) into zombies, though no one notices the difference for a while. Then snowboarders fight off the zombies; there's a snowboard kill, a double ski pole to the face kill, a wooden bench head split and a few other things you haven't seen before. It looks like the people involved have shot snowboarding footage before and decided to make a film; the snowboarding action looks great, the rest is variable. Not all the jokes work - since it was shot in Austria, it's possible many don't translate - but there are some laughs. The acting is okay, the characters actually involving and the thin plot doesn't bog down in the 78 minute run time. There's an inexplicable dance scene. This qualifies as a "B" film, rather than a "Z" film, with a budget of $3 million and is better than what I should post here. It's hard to not watch a film with that title, though.