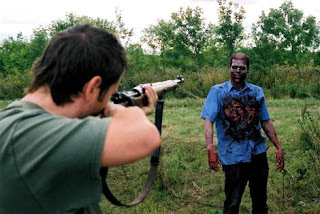 I'm not sure I should include this because, frankly, no one likes it. The original film had several groups that were tied together at the end; this one follows a very linear plot: the last survivors of the zombie plague in England try to make it to the coast in an effort to meet up with others they've heard about. It's done in found footage style, which I never like and one wonders why the guy with the camera never puts it down to help anyone. To say it's deliberately paced would be an understatement, as it's a slow zombie shamble until the end, where there's an ironic twist that doesn't save it. The film is mostly army types versus bandit types (and here they could've had a story about just how much control a society needs, but they don't go there) and there are three gratuitous rape scenes.