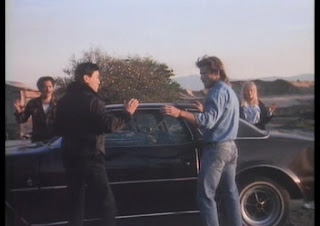 I, for one, cannot pass up an action film with a title that sounds like it was made up by the writers of "Family Guy." Ted Prior stars and shows that his acting talents include growing a beard to go with his mullet. This was directed by Tony Zarindast and I've considered a few of his films for inclusion, but this one is the pick... it even has billboard starlet Angelyne in the cast (whose look has changed so dramatically that I had to re-watch the stripper dance scenes to spot her). A cop is framed and sent to jail, but gets out with his martial arts-expert cellmate to get revenge on the mafia types that put him there. The film is hopelessly padded. Many of the stunts look like they didn't work; one car jumps too far and barely manages to move afterward, a guy on fire walks far too long, and - watch for this - the drivers of the cars in a chase scene actually switch vehicles between shots! There's a fire-eating stripper and an aerobics scene and one long topless scene of a woman getting out of a pool.