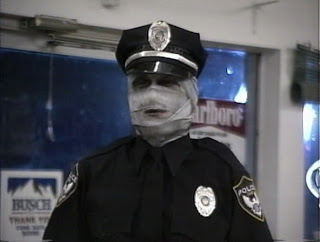 I reviewed J.R. Bookwalter's film "Robot Ninja" long ago and this is his other early no-budget film; it's far, far worse. In fact, Bookwalter has disowned it, making copies of it scarce. It's terribly padded, including repeating an entire scene. The acting, music, cinematography and editing are all quite bad. Bookwalter's films have their fans because his films have action - this is static. The plot: a voodoo villain kills a cop, who comes back from the dead as a voodoo zombie and said zombie rejoins his police force to stop the bad guy.