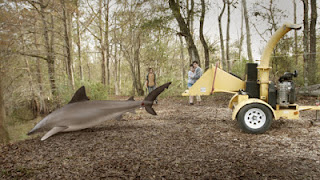 Directed by the same guy who did "Zombie Shark" (2015) which I really thought I'd covered, but apparently haven't, this is much better, though a very by-the-numbers shark attack film. A small town in the ozarks is having a fireworks festival that gets interrupted by bull sharks (I think I'm starting to recognize species of sharks). It's up to a family and the arsenal in the back of a bait shop to stop the sharks. One goes through a woodchipper. It's surprisingly watchable, though it makes no real impression; the acting is better than expected, characters are fleshed out, the CGI is - of course - execrable and it has few slow spots.