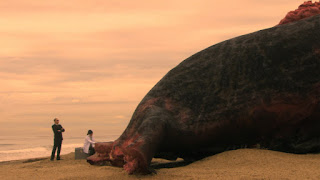 I am SO tired of shark movies (and they're half of what's left to cover). This stars Lorenzo Lamas and Debbie Gibson. The title monsters were in a glacier, but it gets melted and they're released. After some bad ideas for killing them, from atomic bombs to pheromones, they decide the best thing to do is make them fight each other... in other words, the plot of every Kaiju film. The monsters don't even show up until the end. This somehow has spawned three sequels so far: Mega Shark vs. Crocosaurus (2010), Mega Shark vs. Mecha Shark (2014) and Mega Shark vs. Kolossus (2015).