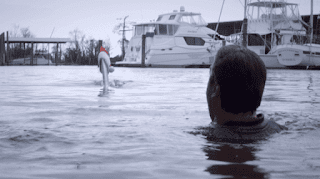 This is the 6th film directed by Misty Talley I've seen (fourth with sharks) and I may have managed to review them all without noting they're by the same director. [See Arachnoquake Ghost Shark Ozark Sharks and Mississippi River Sharks.] She hasn't improved on her use of CGI, but for once she's made a pretty entertaining film. Santa falls in the water, gets attacked and magically becomes the title creature, complete with cap on a fin. A young boy gets a present of a magic pen. He draws cartoons, where he wishes he could be alone for the holidays. This brings about the magic of his family being hunted by Santa Jaws. There's good use of Christmas-related weapons, from candy cane harpoons to wrapping it in strings of lights. The characters are better than usual and even the music is better than usual, being mostly holiday-related. It's cheesy and silly and stupid and the kills are not bloody, so kids could conceivably watch it, if that's the kind of family you have.